Have you noticed Smiley Faces in random places all around Town? Other Towns? Other Provinces? Other Countries? This Smiley Face thing is travelling faster than COVID-19!

David Starcevic, aka “Trucker Dave” has it in him to try to keep things positive. In an effort to unite the Hanna community, he challenged citizens to make a smiley face and put it up in their window for people walking or driving past to see and enjoy. Families out together could try to find them as they got some fresh air and exercise. He calls this the “Trucker Dave Smiley Face in the Window Challenge”. His objective is to try and help Hanna citizens feel like they are a part of something while they are isolated or quarantined in their homes.

David noticed a quick uptake in the project and as Hanna citizens began to share the photos of their homes decked out with smiley faces, he decided to make a Public Group on Facebook called Show Me Your Smiley Face. The Facebook group has had more than 2,000 members join in three days and now, Trucker Dave is seeing images from people and businesses participating all over the globe. He has identified that there are participants from every Province in Canada but he has also seen photos from Philadelphia, Florida, Norway, Sweden and Britain.

David would like to give a shout out to local printing business Tumbleweeds Print Shop as Sandra has printed and donated many smiley face stickers for David to share. Enjoy a small sample of some of the pictures people have shared with Trucker Dave and if you want to take part, there are some Smiley Faces provided below by Hanna’s Chamber of Commerce. Just download, print, color and stick!

Create Your Own Smiley Face!

Smiley Faces from Around the World

photo credit to “Show Me Your Smiley Face” & Trucker Dave 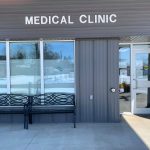